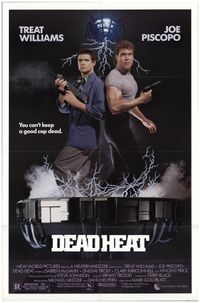 https://www.facebook.com/events/527687971995224/ https://s.kast.live/g/d62m4p924m4 Betamax Video Club 3/27- A celebration of 80's B movie classics and home video club culture featuring live music by Velocity 128 Title: Dead Heat Rating: R Genre: Comedy, Horror, Action Directed By: Mark Goldblatt Written By: Terry Black In Theaters: May 6, 1988 Runtime: 94 minutes Studio: New World Pictures When a dutiful Los Angeles police officer named Roger Mortis tries to apprehend robbers that happen to be zombies, he ends up as one of the undead himself. Since Mortis has managed to stay in his right mind, he aids his loudmouthed partner, Doug Bigelow, in getting to the bottom of the macabre crime ring. Eventually the cops track down the villains and try to end their supernatural thievery.