Synthwave and Soundtrack Vibes at the Betamax Video Club

In the past couple of months, I've been playing music for a monthly event in Washington, D.C. called Betamax Video Club. In their words, it's "a celebration of 80's B movie classics and home video club culture." Before and after the movie, I play some obscure tunes from today that were inspired by the 80s, along with other styles that would fit the mood for the night.

Featuring the balearic, warm-weather beats of Max Essa and Aria Rostami; a fusion of world music and rhythmic styles by Kalaha; retro 80s synthwave by Timecop1983, Mitch Murder, Makeup and Vanity Set,  and t e l e p a t h; driving vocals in drum and bass by Hannah Epperson and Out of Fuel; r&b inspired bass by denitia and sene., the ambient analog sounds of Jo Johnson; chill tracks by edapollo and Mick Chillage; a block of leftfield techno from Amsterdam's Atomnation label; and analog synth soundtracks by Celldweller. 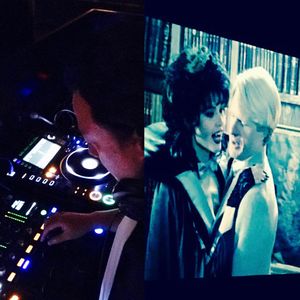